Full of sex, sleaze, and retro '70s vibes, the ever-stunning St. Vincent brings her Daddy's Home Tour to Wang Theatre on Thursday 14th October 2021! The chameleonic singer will be performing tracks from her sixth studio album with her Down and Out Downtown band, who backed her triumphant SNL performance earlier in the year, which was praised by critics far and wide:

“… this performance, with its retro '70s rock aesthetic, truly rules… this is top notch.” —ENTERTAINMENT WEEKLY 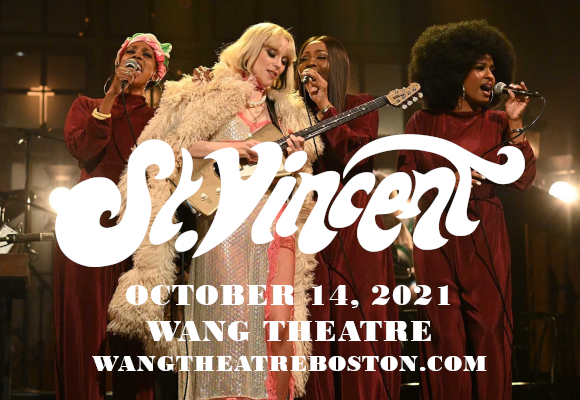 American musician, singer, songwriter, and producer St. Vincent (aka Annie Clark) began her music career in the early 2000s as a member of the Polyphonic Spree. She released her critically acclaimed debut album, Marry Me, in 2007 and was lauded for her layered instrumentation and intelligent lyrics. It was her third studio album, 2011’s Strange Mercy, that served as her US breakthrough, reaching number 11 on the Billboard 200. St. Vincent, her 2014 follow-up, was named album of the year by The Guardian, Entertainment Weekly, NME, and Slant, as well as second best album of the year by Time. It won her the Grammy for Best Alternative Album at the 57th Annual Grammy Awards, making her the first solo female performer in 20 years to win a Grammy in that category. The album landed on 18 ‘End of Year’ lists, ranking at number one on six of them. Clark's fifth studio album, Masseducation (2017), earned her Best Rock Song and Best Recordings Package at the Grammy Awards and debuted at number 10 on the Billboard 200. Her sixth and most recent album is 2021’s Daddy’s Home.