Tickets are on sale now to see the rising superstar that is Maggie Rogers LIVE! As she comes to perform in Boston Massachusetts on the Wang Theatre stage on Saturday Saturday 5th October 2019. The talent of this songstress is definitely in the forefront and is a must-see for 2019 concerts. Maggie has been busy creating her incredible latest new album and is bringing it to the stages across the US this coming Summer/Fall & Winter! So don’t let this once-in-a-lifetime opportunity pass you by. Click the Buy Tickets button below to make sure you get one of the best seats in the house! 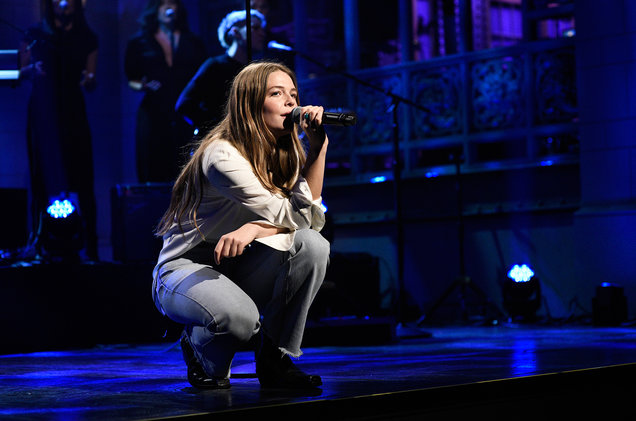 News feeds everywhere are lit up with the announcement of Maggie Rogers coming to Boston this October!

After her YouTube success story with Pharrell Williams, Maggie Rogers has had an explosive start to her undoubtably long-term career! With her showcase of her song "Alaska" in her university master class, with the support of Pharrell Williams who gave her nothing but positive feedback, the success has been out of this world!

Starting off in humble beginnings, Maggie Rogers grew up in Easton, Maryland where she was an avid songwriter, creating songs from inspiration from the likes of Neo Soul star Erykah Badu as well as Lauryn Hill, to legendary and classic folk and rock artists such as the likes of Patti Smith and Neil Young. Her soundscape at first was a unique sound but involved a folk infusion of instrumentation with guitar, banjo and of course her own vocals. However with a move to NYC and a dedication to making music her lifelong dream, she started at University and combined her love for all kinds of music and quickly found her newly developed sound, which includes electronic and dance elements – Maggie Rogers as we all know and love her was born.

During her time completing her degree, Maggie Rogers had already written some of the hit songs we've all heard on the radio and just can't get enough of! With her EP – Now That the Light Is Fading, released in 2017 and single releases such as; "Fallingwater", "Give a Little", and "Light On," she gave way for her next studio release.

Maggie Rogers returned in 2018, after an extensive period of non stop touring with her latest album, Heart It In a Past Life, the record has led her to performances that she could never have dreamed of, with major festivals across the UK and Europe and the US, plus sell out shows across the world! With performances on Jimmy Fallon and Saturday Night Live it has pushed her music extensively and it's hard to find someone who doesn't know her name!

2019 brings her latest album to light and with it a groundbreaking North America tour – don't miss out!